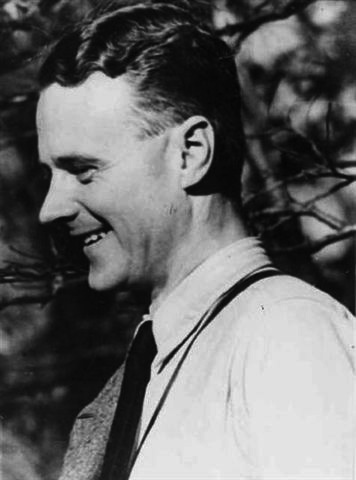 <h1>Write Nothing about Politics: The Life of Hans Bernd von Haeften</h1>
Written by Barbara von Haeften
Translated from the German by Julie Winter

Moltke was arrested on January 19, 1944. At first, the only thing that incriminated him was the fact that he had warned Kiep of his impending arrest; not until July 20 was his connection to the Friends known. Although I see nothing in Hansen’s letters about it, it’s clear that the circle of Friends had lost its center and its driving force.

At the end of January Werner suddenly saw an opportunity to kill Hitler. When Werner was with Hans and went to get his pistol out of the suitcase, Hans demanded of him: “Is this really your duty before God and our forefathers?” Werner capitulated. Hans was, however, very troubled that he had intervened since Nazi crimes and bestial war atrocities continued.

At the end of February Hans was promoted to legation counselor first class with the title of Privy Counselor in the Foreign Office. At the same time, along with this promotion through the Reich Chancellery, Hans’ rejection for membership to the Nazi Party arrived from the Party Chancellery–both documents had Hitler’s signature. “By the way,” he wrote, “when Six communicated the matter to me, the truly friendly applause I received made me happy” [Letter from March 3]. During this time Hans was quite stressed; he often had to represent Six as the acting department director. The air attacks were now occurring frequently, even during the day. “The madness is insane” [March 16].

Hans received sick leave on April 23 and went to a health resort in Karlsbad for four weeks. His mother followed him there. Shortly before Ulrike’s birth he came to me in Neustrelitz and was able to accompany me the next night to the clinic for the delivery. The next morning, May 19, he greeted Ulrike and me joyfully, and soon thereafter he brought Jan from school to join us.

We did not remain in Neustrelitz long because even there it was dangerous due to low-level air attacks. Hans spent a few undisturbed, peaceful, sunny days with us in Grammertin. He now had to be available at the Foreign Office and was waiting for his transfer, which was still uncertain. So he could visit us now and again and escape the air attacks in Berlin. And he could also distance himself from weighty considerations and practical preparations for the assassination attempt and overthrow that he was constantly confronted with through his brother Werner, who had become Stauffenberg’s adjutant in the meantime.

All of this caused us to plan Ulrike’s baptism right away. That was the last happy family celebration in Grammertin on June 25, 1944.

Hans was with us again on July 19 for Jan’s birthday, and he was able to take an unforgettable walk with the four older children, who were on school vacation, to a neighboring lake. But Hans was already in a state of great anxiety on this day, July 19, and he talked to me about it. He expected his brother Werner’s call at any moment. Twice the date for the assassination attempt had been postponed because one of the “leaders” was missing. “This time, the film must roll,” Hans said to me. Even if Göring or Himmler should not be there, this time the alarm of the Berlin guard could not be called back–it would have been too noticeable and would have aroused suspicion. Anyway, Hans suspected that the assassination plan had already been discovered. And he was, above all, full of doubt as to whether it could even succeed. “The curse of ‘too late’ has long been lying over the whole thing.” He often said to me, “If murder of a tyrant is allowed at all, then sooner rather than later! They should have acted before Stalingrad” [1942/43]. However, he did not necessarily believe that Hitler had to be murdered. He much preferred for Hitler to be judged by a court. (Gerrit von Haeften, Hansen’s cousin in the Foreign Office, was able to confirm this for me in 1970.) In spite of this, Hans finally agreed to the assassination attempt. I am certain that in spite of its failure, he would never have been able to decide otherwise, even though he believed the commandment “Thou shalt not kill” was completely binding, and he considered himself guilty due to his consent. Above all, his guilt consisted in the fact that he and the other Friends had not summoned enough imagination to find a political solution that could have caused Hitler to fall and brought about a coup. However, now they could no longer wait it out and watch all the injustice. Now they had to act, even with violence, before the Friends of the resistance all individually disappeared without a sound in prisons and concentration camps. Bonhoeffer had already been arrested in 1943, and Moltke in 1944; Elisabeth von Thadden and Kiep were murdered by Hitler’s myrmidons. Mierendorff had been killed in an air raid. Now Leber and Reichwein had fallen into a trap, and the conspiracy would soon be discovered. However, from an international point of view, even a successful coup wouldn’t bring much. “Now it’s only a matter of an orderly capitulation,” Hans said to me on July 20. And so he marched, not exactly happy or even sure of victory, into the decisive battle, when he left us on July 20 in the morning and went with his bicycle to Altstrelitz for the train to Berlin.

That evening I heard from a radio report that an assassination attempt had failed! “The Führer is alive…a military putsch.” I did not listen to the radio in general as I knew too well that every statement was a lie, and yet, the “failure” was correct. I did not dare telephone Dahlem until the next afternoon. There I found out from Jankofsky, our custodian, that Hans was greatly worried about Werner because Werner had not returned home last night. I knew that this was already the news of his death.

I know from a detailed report by Wilhelm Melchers how the hours on July 20 in the Foreign Office went by for Hans, along with Adam Trott and the Friends that were brought there, Melchers and Alex Werth. Hans himself did not tell me about it in as detailed a way when he returned to us, just for the night of the 21st, very agitated and deathly pale. He wanted to tell me about Werner’s death and to say goodbye to all of us–and to speak plainly, he wanted to give me his last farewell. Hans was very dejected and filled with worry about whether he could withstand the interrogations without giving away the Friends and our good cause. I was strangely calm; perhaps this was a comfort to him–even though when I later sat in my cell in deep despair and distress, it seemed almost harsh. But on this morning of leave-taking it was amazing that I was able to comfort him with the promise Christ made to his disciples: “When they now will give you over, do not worry how or what you should answer. For what you should say will be given to you in the hour of need. For it is not you who are speaking, but rather the spirit of your Father, who is speaking through you” [Matthew 10: 19].

And that’s how it was. Hans stepped before Freisler at the People’s Court with self-confidence. The photos of a press photographer and the documentary films show this clearly. I quote the wording of the debate between Hans and Freisler according to Dr. Jens Peter Michael’s article “Hans Bernd von Haeften” in the Deutscher Juristenschrift from December 1995:

On August 15, 1944, during the proceedings against Bernhard Klamroth and others, Hans Bernd von Haeften was also interrogated. A section from the official film recording documents this [F=Freisler, H=von Haeften]:

F: What was your last position in the Foreign Office?

F: Legation Counselor. At the end you were active, you were Acting…Director of the Cultural Policy Department.

F: Now then. Don’t you realize that when a people is struggling hard and when one of the probably thousands of colonels that there are in the army of this people has such an opinion, it’s treason to deviate in any way from loyalty to the Führer…

H: I no longer felt this duty to loyalty.

F: Aha, so, then it’s clear that when you didn’t feel it, you said to yourself, if I don’t feel loyalty, I can commit treason.

H: No, it’s not exactly like that, but rather I thought…that is, according to the view I have about the historic role of the Führer, namely, that he is a great executor of evil, I was of the opinion…

F: Well then, now it’s quite clear. There’s nothing more that can be said about it.

F: So. It’s not worth wasting any more words on this topic. I think any additional questions would only diminish my impression.

Freisler abruptly broke off the interrogation. Later the head state prosecutor Lautz went back to this unbelievable incident from the trial proceedings in his last address to the court. He said: “In two points the picture of the proceedings today resulted in something unusual that I would like to place at the forefront of my address… The second point is that one of the accused dared, dared after the monstrous extent of his guilt had been emphatically placed before his heart by the chief presiding judge, this accused dared to give an explanation that dwarfs everything else we’ve heard to this point in this area concerning his opinion of the Führer and the people. None of all the accused who have been interrogated to this point dared such an explanation; he dared to do this, even though in the meantime he would have become aware of the fact that he, with his act, was the executor of everything evil. I mean the accused, von Haeften.” Freisler wrote briefly in his judgment explanation: “His hate-filled words spoken before us demonstrate the way he [von Haeften] thinks–that he sees in the Führer the ‘great executor of evil.’”

Eugen Gerstenmaier later said that Hans Bernd von Haeften’s statement had actually been the decisive expression of the whole resistance.

According to the death certificate from April 15, 1948, “Hans Bernd von Haeften died on August 15, 1944 at 20:15. The cause of death: hanging.” That is, he died on the day of the proceeding and pronouncement of the judgment at the People’s Court.
<h2>Barbara von Haeften</h2>
Barbara von Haeften, the daughter of Julius and Adda Curtius, was born in 1908 in Duisburg, Germany. Her father held the positions of Minister of Economics and Foreign Minister in the period of the Weimar Republic. In 1930, Barbara married Hans von Haeften, a lawyer and diplomat who later became a legation counselor at the Ministry of Culture. Barbara and Hans von Haeften were members the Confessing Church that fought Nazi control of the churches. Hans von Haeften became active in the Kreisau Circle resistance group in the early 1940s and was closely connected to the July 20, 1944 plot to assassinate Hitler. In fact, his brother, Werner von Haeften, was Claus von Stauffenberg’s aide; he helped von Stauffenberg carry out the assassination attempt. Both Werner von Haeften and Claus von Stauffenberg were executed on the day of the failed attempt. Hans von Haeften was arrested shortly thereafter and hanged on August 15, 1944. Barbara von Haeften was arrested on July 25, 1944 and was not allowed to take her newborn baby, her fifth child, to prison with her. She was released on September 30, 1944.

<em>“Nichts Schriftliches von Politik.” Hans Bernd von Haeften: Ein Lebensbericht (C. H. Beck, 1997) is Barbara von Haeften’s only published work. She moved to Lake Constance after 1945 and later to Heidelberg. In 1975, she moved in with her daughter near Munich. She died in 2006.</em>

Text und Quelle: <a href=“http://intranslation.brooklynrail.org/german/write-nothing-about-politics-the-life-of-hans-bernd-von-haeften%20 T received the death certificate in April 1948 and only by asking for it because of my widow’s pension.“ target=“_blank“>http://intranslation.brooklynrail.org/german/write-nothing-about-politics-the-life-of-hans-bernd-von-haeften</a>